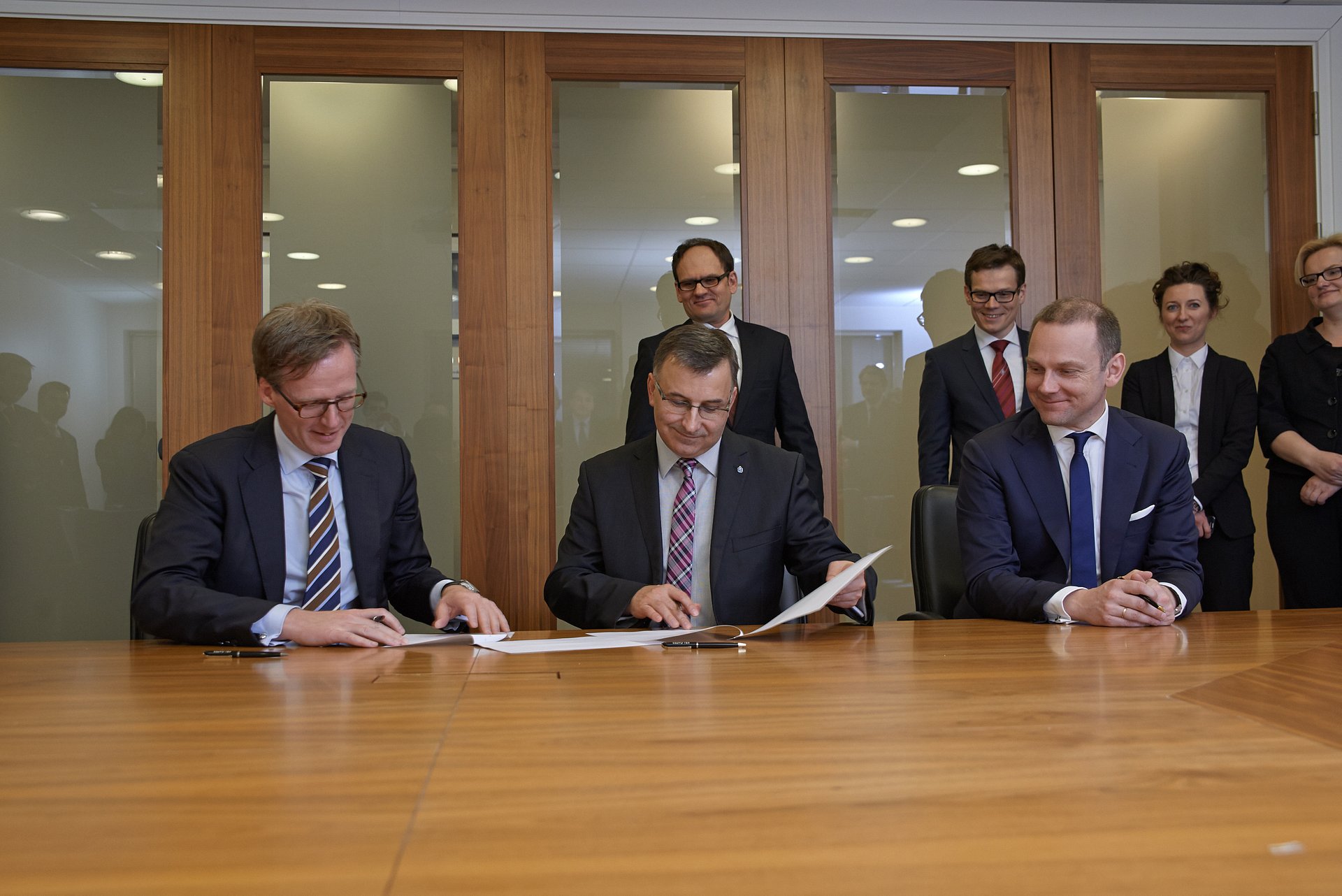 As of April 1st, PKO Bank Polski Capital Group has been expanded by Nordea Bank Polska, Nordea Finance Polska and Nordea TUnŻ. The total final price for the acquired companies amounted to almost PLN 2.81 billion. Over seven years, a loan portfolio denominated in foreign currencies and valued at PLN 15.2 billion will be refinanced by Nordea Bank AB. The full completion of the integration is scheduled for the first half of 2015.

The take-over starts with integration of the banks which is to be implemented in two stages. The first one covers a formal merger of the both institutions, while the second one – the operational merger. The entire integration process will last about one year.
-Until now PKO Bank Polski had been growing in an organic way, by strengthening its position of the market leader. Taking over Nordea’s assets will allow the bank to accelerate the growth and to implement our plans of building new quality of banking services. The integration of the companies within one capital group is one of our most important goals set for this year. Personally, I see it as a chance not only to increase the scope of our operations, but also to expand both in retail and corporate banking, while maintaining high efficiency – says Zbigniew Jagiełło, CEO at PKO Bank Polski.
Until the legal merger expected early October 2014, Nordea Bank Polska will be a separate company operating within the Bank’s capital group. Both banks will maintain their independence in terms of provided services, but with some exceptions. Following Nordea’s becoming a part of PKO Group, customers of the both banks, while using debit cards, will have a free access to a combined network of ATMs. Starting in April this year, PKO’s customers who buy or have mortgage loans and credit cards, will have an access to life insurance offer provided by Nordea Polska TUnŻ. Soon, PKO Bank Polski’s cash loans, among other things, will be available in Nordea network. As of September last year, Nordea Bank Polska, in turn, has been offering 27 funds and open-ended sub-funds, a regular savings program (OPI) as well as PKO TFI investment  solutions drafted specially for Nordea’s customers.

From the customers’ point of view the legal merger does not mean standardized operations of the both institutions. The process of the banks’ integration will be completed by the operational merger scheduled for the middle of 2015, which means combining operations, systems and IT resources of the both institutions. During this period, a gradual standardizing of the operations will be launched, for instance in terms of providing an access to branches and transactional systems to all customers.

Nordea TUnŻ will remain a separate entity within PKO Bank Polski Group and will operate under PKO brand name. Based on it, the Bank intends to build a new model of insurance sale. On the other hand, Nordea Finance Polska that deals with leasing and factoring will be eventually merged with PKO Leasing.

Thanks to the deal, PKO Bank Polski Capital Group has grown by over 2,000 employees from Nordea’s companies, to over 29,000 people.

-Now, we face an ambitious challenges defined in our new strategy for 2013-2015. The projects we implement cover all areas of operations of the bank and all companies of the group. This means many career opportunities within one of the largest financial institutions in the Central and Eastern Europe, also perceived as a respected employer. I believe that together we can achieve more – Zbigniew Jagiełło adds.

Thanks to the take-over, PKO Bank Polski will strengthen its market position. Its network in large cities will increase 25 per cent; most of the branches will be attractively located. The segment of affluent customers will grow 8 per cent. Taking over Nordea Polska TUnŻ will accelerate meeting strategic goals in bancassurance area. The deal will strengthen PKO’s position in the corporate banking segment, especially in the area of municipal and corporate bonds and servicing companies from the key sectors of the economy, including financial settlement services of international reach. The merger will also speed up the development of the Capital Group’s offer in leasing and factoring products.

A provision that Nordea Bank AB for seven years will provide refinancing for foreign currencies-denominated loan portfolio valued at PLN 15.2 billion was one of the deal’s terms and an appropriate agreement was signed on April 1st. For four years, Nordea Bank AB will also cover 50 per cent of costs of the risk resulting from the portfolio’s write-offs exceeding 40 basis points on the year.

The settlement of the deal is scheduled for April 4th this year. The revised purchasing price of Nordea Bank Polska is PLN 2.62 billion, while Nordea Polska Towarzystwo Ubezpieczeń na Życie – PLN 184.6 million. The revisions were made due to the bank’s and the insurer’s financial results between January 1st, 2013 and February 28th, 2014.

Websites of PKO Bank Polski, Nordea Bank Polska and other companies will include special bookmarks related to the merger. In addition, within several days after completion of the deal, each costumer will receive a special welcome letter.

***
PKO Bank Polski is the Polish banking sector leader. In 2013, PKO Bank Polski Capital Group posted a solid financial result of PLN 3.2 billion. The bank is Polish company with the highest value of free-float shares listed on the WSE. PKO Bank Polski was ranked as the third one in Banking Quality 2013 ranking developed by TNS Polska and Puls Biznesu daily. The bank’s Contact Centre, for the fourth consecutive time, was the winner in a cyclical survey of bank hot-lines carried out by ARC Market and Opinion. According to a survey by Marketing Research Centre Indicator and the Warsaw Banking Institute, it has been a bank of the first choice for small and medium-sized companies. PKO Bank Polski’s annual reports are regular winners in The Best Annual Report contest organized by the Accounting and Tax Institute in the Banks and Financial Institutions’ category.  For complying with corporate governance principles and its activity in Corporate Social Responsibility area, PKO Bank Polski was honoured with the Economic Prize of the President of the Republic of Poland. PKO Bank Polski is also a bank with the strongest image in Poland and the prestigious magazine The Banker values PKO Bank Polski brand at USD1.25 billion. In the Most Valuable Polish Brands 2012 ranking by Rzeczpospolita daily, PKO Bank Polski brand proved to be the most valuable one in the finance category – it was valued at PLN3.72 billion. The jury of the contest the Banking World Leaders, organized within the framework of the Polish Economic Congress, awarded PKO Bank Polski with the prize in the 2012 Best Bank and The Most Innovative Bank category for its new offer of School Savings Associations (SKO). In rankings based on students’ opinion, the bank found itself among the best employers in the banking sector. Surveys carried out among students of the best universities in the country by a global company Universum Global and AIESEC have confirmed the bank’s high ranking in this category.