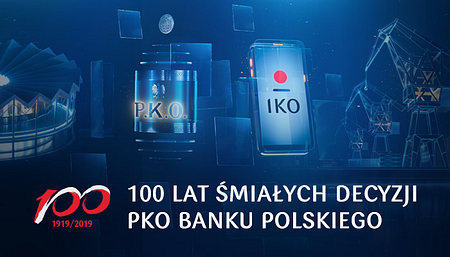 It was exactly one hundred years ago that a decree on the establishment of Pocztowa Kasa Oszczędności was signed. PKO Bank Polski, as its successor, enters the second century of its activity as the indisputable leader in its industry and the most valuable company at the Warsaw Stock Exchange. The Bank has grown inseparable with the Polish economy. In the last decade, the key drivers of development included innovations and modern technologies. Thanks to them, the Bank successfully accelerates digitisation of the country, supporting development of Poland and Poles.

Mere three months passed since Poland re-gained its independence when on 7 February 1919 Head of State Józef Piłsudski, Prime Minister Ignacy Paderewski and Minister of Post and Telegraphs Hubert Linde signed a decree on the establishment of P.K.O., entrusting the new institution with a mission of organising a money saving system in Poland, necessary for rebuilding the country after years of partitions and destruction of WWI.
In spite of objective difficulties, including differences in the level of development of economic life, currencies used and organisation of money circulation, P.K.O. implemented these tasks successfully. This allowed for its engagement in key state investments of the period, including construction of the harbour and city of Gdynia and the Central Industrial District. Making use of a network of postal facilities, P.K.O. grew together with the independent state in order to become the largest depositary of Poles’ savings only ten years later. It soon expanded its operation abroad - in 1929, it established a joint stock company Polska Kasa Opieki in order to make it easier for Polish immigrants dispersed around the world to send savings to the home country.
“Certainty and Trust” - the advertising slogan devised in the inter-war period by the legendary President of Kasa, Henryk Gruber, in a concise form encapsulated the key values on which PKO built the power of its brand for the next generations, along with reliability and relations with customers. For millions of Poles, the abbreviation PKO is the synonym of a bank, similarly to the logo designed by Karol Śliwka in 1966, the characteristic coin bank, one of the most recognizable graphic symbols in the country.
“PKO has quickly become an integral element of domestic economy and this has not changed to this day. We are entering the second century as a modern, universal bank, the largest in Poland and in the region and, at the same time, the most valuable company at the Warsaw Stock Exchange, appreciated in the country and abroad.  Even though today’s scale of the Bank’s operation might surprise our founders, our mission, unchanged for 100 years, is to support the development of Poland and Poles. We are fulfilling it on a daily basis, using more and more advanced tools, adequate for operation in the digital world. We are using innovative technologies in order to build an eco-system of modern services tailored to the current challenges and going far beyond the traditional banking. This is our task for the next decades,” said Zbigniew Jagiełło, President of PKO Bank Polski.
In the course of the last decade, the assets of the Capital Group doubled their value, exceeding the threshold of PLN 300 billion. The number of customers, which include individuals, small and medium-sized enterprises and large corporations as well as local governments, reaches 10 million. The Bank has an extensive network of branches in the country, well-developed Internet banking services and is the leader on the market of mobile banking. Last year IKO, the flagship product of PKO Bank Polski, was rated the best mobile app among 100 banks from all over the world in the prestigious ranking of Retail Banker International, beating such giants as the Bank of America, UBS, Lloyds and Barclays. Following the success of IKO, upon the initiative of PKO, six competitive banks created the Polish Payment Standard, the operator of the BLIK system, which - four years after its début - has 80% of the banks’ customers within its range, significantly contributing to the promotion of cashless trading in the country.
In line with the idea of digital transformation on which the current long-term development strategy relies, the Bank successfully cooperates with financial start-ups as part of its signature programme Let’s Fintech with PKO Bank Polski. The Bank was the first in the domestic banking sector to apply blockchain, using this technology to send information about changes in regulations to over 5 million customers. In October 2018, the Bank, together with PFR, announced the establishment of a technological company, the operator of Chmura Krajowa, the goal of which is digitisation of Polish companies.
The scale of operation, focused on long-term growth, the strategy and the accomplished financial results make PKO Bank Polski highly valued by investors, both in the country and abroad. The bank had its début on the Warsaw Stock Exchange in 2004. At the present moment, it is the most valuable company on the domestic trading floor with capitalisation reaching PLN 50 billion and the only Polish entity which in September 2018 was included in the group of large companies in the developed market index by the global agency FTSE Russell.