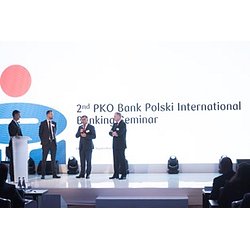 PKO Bank Polski has been awarded two prestigious Quality Recognition Awards by the US bank JP Morgan. PKO Bank Polski received the awards in recognition of the top quality of interbank transactions in US dollars, 99.74% and 98.34% of which, depending on the type, were transactions executed perfectly. The awards were handed during the 2nd PKO Bank Polski International Banking Seminar, the biggest event held in Poland for representatives of foreign banks.

The Quality Recognition Award has been granted since 1997 to the key clients of JP Morgan who have achieved operational excellence. A high number of executed interbank transactions is an additional criterion.
“PKO Bank Polski champions the development of international banking and active cooperation with foreign banks. We are the leader in terms of the number of international transactions and the group of banks with which we settle transactions now includes more than 1,400 institutions from all corners of the world. JP Morgan’s awards are another proof of the strong and entrenched position of PKO Bank Polski in the international and correspondent banking segment. I am proud that the awards were presented during the International Banking Seminar - the biggest meeting of representatives of foreign banks held in Poland, emphasised Radosław Ptaszek, Head of the International and Institutional Banking Department in PKO Bank Polski.
2nd PKO International Banking Seminar
The International Banking Seminar organised by the International and Institutional Banking Department is the biggest meeting of representatives of foreign banks held in Poland. Over 40 banks from all corners of the world accepted invitations to this year’s event and they were represented by more than 70 international banking managers.
The aim of the meeting was to foster the relations and establish new business contacts in the area of international and correspondent banking. Owing to the fact that PKO Bank Polski has established direct relations with foreign financial institutions, no intermediary banks have to be involved in the foreign exchange settlement process. Thanks to that, the cost of international credit transfers paid by customers are lower and the transactions are performed faster. Such settlements are available to retail and corporate customers.
PKO Bank Polski now works with banks operating in all the countries of importance for Polish customers, offering international settlements in twenty-three currencies. This year, PKO started handling direct settlements in the Singapore dollar and the South African rand. The development of correspondent banking has enabled the customers of PKO Bank Polski to not only gain simple savings but first of all reinforces the feeling of having a competent partner, who follows its customers supporting them wherever they do business.
The quality of PKO Bank Polski’s services has been recognised by global and the biggest regional banks, which choose PKO to be their exclusive partner for business in Poland. Recently, one of the most important banks in the Asia and Pacific Region, Australia New Zealand Banking Corporation, has decided to continue a business relationship with PKO Bank Polski, having carried out a complete evaluation of the quality of PKO’s correspondent banking service.
***
PKO Bank Polski is the indisputable leader in the Polish banking sector. In the half of 2016, its consolidated net profit amounted to PLN 827 million, whereas the balance sheet sum reached PLN 286,4 billion. In 2016, its net profit amounted to PLN 2.87 billion, what was the best result in the Polish financial sector. The bank is the basic supplier of financial services for all client segments and has highest share in the deposit market (17.3%) and loans (17.7%), including mortgage loans; every third mortgage loan is granted by PKO Bank Polski and PKO Bank Hipoteczny. Having 8 million pay cards, the Bank is the largest issuer of debit and credit cards in Poland with a share in the market on the level of 22%. Thanks to the development of digital tools, including the IKO app, which was already activated 1.2 million times, PKO Bank Polski has become the most mobile bank in Poland. The Bank’s strong position is reinforced by companies from the Capital Group. Dom Maklerski (Brokerage House) of PKO Bank Polski is the leader with respect to the number and the value of IPO and SPO transactions at the capital market. After the take-over of Raiffeisen-Leasing Polska, the Capital Group became a leader at the lease market, with a share on the level of 13%. Efficient implementation of growth strategy made PKO Bank Polski the highest positioned domestic financial company in the Forbes Global 2000 ranking, including largest listed companies in the world. In 2016, The Banker monthly magazine that belongs to Financial Times, awarded PKO Bank Polski with the “Bank of the Year in Poland” prize for the third time.
Michał Zwoliński
Michał Zwoliński
Rozwój Grupy Kapitałowej PKO oraz wyniki finansowe
prasa@pkobp.pl
+48 22 521 46 36
@MichaZwolinski