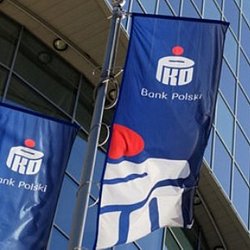 The PKO Bank Polski Group generated a net profit of PLN 647.2 million in the Q1 2015 and the assets exceeded a quarter of a trillion of Polish złoty for the first time in the history of the Polish banking sector. Effectiveness remains high with ROE at 11.5 percent and ROA at 1.3 percent at the end of the Q1 2015. Thanks to the significantly improved portfolio's quality the cost of risk fell to 90 bps, the lowest level in five years. The Bank's results in the first half of this year will not be fully representative because they are penalized by integration costs and adverse market and regulatory factors. The smooth completion of the operational merger with Nordea Bank Poland should positively impact financial results of PKO in the second half of 2015.

The integration of Nordea Bank Poland, one of the most important latest projects was completed in April. PKO Bank Polski conducted the merger smoothly in only 12.5 months after closing.  The integration comprised primarily the rebranding and data migration of over 300 thousand customers to the modern operational platform of PKO Bank Polski.
Currently, all the Bank's customers are provided with the same standard of service. The integration of PKO and Nordea is an example of the fastest and one of the most effective mergers carried out on the Polish banking market in recent years.
Based on a detailed review the Bank assumes now higher than originally considered level of cost synergies. The total estimated synergies (gross) resulting from the acquisition will amount to PLN 300 million per year annually starting as of 2017, ie. after the completion of the integration process.
Good results despite the integration costs and a difficult regulatory and market environment
Both, the net interest income and fee income of PKO Bank Polski remained at levels similar to those achieved in the first quarter of last year, despite the integration costs, reduction of interest rates, lower interchange fees and the increase of the BFG fee, which are currently a burden to financial results.
In Q1 2015, the net interest income stood at PLN 1.67 bn. The net fee and commission income was at PLN 679.2 million. Result on business activities increased by 1.3 percent YoY to PLN 2.6 bn.
Q1 2015 results were strongly influenced by the level of consolidated general and administrative expenses, which amounted to PLN 1.4 bn. The level of operating expenses was mainly impacted by higher BFG fee and costs associated with the acquisition and integration of Nordea companies. While most of the expenses connected with the merger were incurred immediately before and after the merger.
Despite the temporarily higher cost the Group’s effectiveness remains at a very high level. C/I ratio stood at 49.4 percent on an annual basis, which is below the average in the banking sector.
The dynamic growth in assets and market shares

Consolidated assets grew by 26.3 percent YoY to PLN 256.6 bn due to increase in net loans by nearly 22 percent YoY to the level of PLN 182.4 bn, financed by more than 16 percent increase in customer deposits, which stood up at PLN 178.4 bn. The Bank strengthened its leading position in the Polish banking sector in all market segments by leaps and bounds. Loan market share had risen by 2.0 percentage points YoY, mainly thanks to an increase in market share of retail loans by 3.7 percentage points YoY, particularly in the profitable consumer finance segment.
Significant improvement of the loan portfolio quality

Within the past 12 months the trend of improving portfolio quality remained positive. The cost of risk and the share of loans with recognized impairment were declining. The coverage ratio was rising. The cost of risk stood at 0.90 percent at the end of the first quarter of 2015 years, which translates into a decrease by 36 bps YoY. The largest decline in the cost of risk YoY was recorded in consumer loans - 50 bps, where the Bank uses prudent credit policy.
By improving all categories of loans the share of loans with recognized impairment was 6.8 percent as at the end of the Q1 2015. It represents a decrease of 1.3 percentage points YoY. The coverage ratio increased by 10.3 percentage points YoY to 62.8 percent. Net impairment losses on loans amounted to PLN 373.6 million and it fell by 9.6 percent YoY, mainly due to decrease in write-downs on the business loan portfolio.
Secure liquidity and capital position
Capital ratios of PKO Bank Polski remain at a stable and safe level. At the end of Q1 2015, the adequacy ratio stood at 13.5 percent and Core Tier1 ratio was 12.3 percent. Moreover, the Bank complied with the recommendations of the Financial Supervision Commission as regards the payment of dividends from the 2014 profit. PKO Bank Polski took the highest rank among the 743 Polish companies classified in the latest prestigious Forbes Global 2000. The ranking, created based on four indicators - revenue, profits, assets and market value, is intended to present the most powerful public companies in the world.
***
PKO Bank Polski is a leader of the Polish banking sector. After 1 st quarter of 2015, PKO Bank Polski Group posted a consolidated net profit of PLN 647.2million. PKO Bank Polski ranked #1 with six stars in the overall classification in the Forbes magazine Best Corporate Bank ranking. The Bank ranked #3 in the Banking Quality 2013 ranking of TNS Polska and Puls Biznesu. The Bank’s Contact Center, for the sixth time in a row, was a winner in a regular survey of banks’ hotlines carried out by ARC Rynek i Opinia. The Bank won for another consecutive year in the ranking of the top 50 banks in Poland published by the financial monthly Bank. PKO Bank Polski won this year’s edition of the ranking in the category of Property Financing Banks and ranked third among Consumer Finance Banks. PKO Bank Polski was awarded for the implementation of the IKO application in the Electronic Banking and E-Finance category of the 12th edition of the Financial Institutions IT Leader 2013  competition of Gazeta Bankowa. PKO Bank Polski was also awarded for its Innovation Centre in the category Back Office Systems. Around a dozen financial institutions, mainly representing the banking and insurance industry, competed for the IT Leader award. The jury of the Competition of the 8th E-Economy Congress awarded PKO Junior in the Project of the Year category. PKO Bank Polski also enjoys the strongest image among Polish banks. According to a prestigious magazine The Banker which values PKO Bank Polski’s brand name at USD 1.25 billion, the Bank remains the most valuable brand in Polish banking sector. According to the ranking of the Most Valuable Polish Brands 2013 by Rzeczpospolita daily, PKO Bank Polski remained the most valuable brand in the financial industry category, valued at PLN 3.7 billion. In 2012, the Jury of the Banking Leaders Competition, organised as a part of the Polish Economic Congress, awarded PKO Bank Polski as the Best Bank and the Most Innovative Bank for the new offer of School Saving Associations. In rankings based on students’ opinions, the Bank was ranked as one of the best employers in Poland. The Bank’s high position is also confirmed by surveys carried out by the international company Universum Global and AIESEC among students of Poland’s best universities. PKO Bank Polski is also a winner of the Golden Banker 2013 award in the Best Mortgage Loan and the Financial Innovation categories for its IKO application.

In the first half of 2021, the Capital Group of PKO Bank Polski generated over PLN 2.4 billion of net profit. This is the highest result in the Bank's 100-year history and the historically highest profit in the entire Polish banking sector. The excellent results translat...
Financial results

PKO Bank Polski’s profit is close to breaking the record

The economic effects of the third wave of the COVID-19 pandemic were much less severe than the two prior ones. The relatively good economic situation, coupled with the Bank’s great resilience to the turmoil and a strict cost discipline translated to the increase in the G...
Financial results