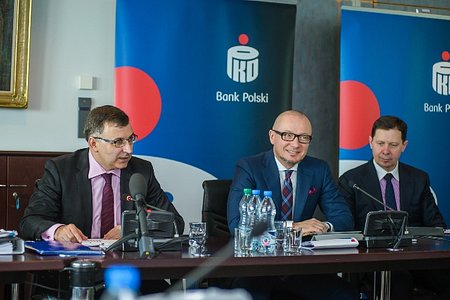 The PKO Bank Polski Group generated a profit of PLN 3.25 bn in 2014. Consequently, one of Poland’s biggest banking groups improved its results year on year. Compared to its peers, the PKO Group stood out with high effectiveness and clearly improved its loan portfolio quality as demonstrated by the cost of risk reduced to 96 bps from 131 bps at 2013 year-end. The Bank’s market share in lending rose sharply to 17.9 percent following the merger with Nordea Bank Polska. The number of retail clients increased to 8.9 million while the number of corporate clients was 14.1 thousand. PKO Bank Polski clients appreciate new technologies, as evidenced by the dynamically growing number of users of IKO mobile payments and iPKO and iPKO Biznes electronic banking services.