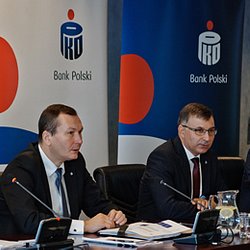 Harsher economic conditions translated to the results of PKO Bank Polski Group, which in the 1st half of 2020 generated PLN 1.3 billion of net profit, 37.2% less than a year ago.
Financial results

PKO Bank Polski SA ended 2019 as the most valuable company listed on the Warsaw Stock Exchange. The PKO Bank Polski Capital Group made net profit of PLN 4.03 billion, by over 7.8 percent more in comparison with the previous year. This has been possible, among other thing...
Financial results

Another quarter of excellent, reproducible results