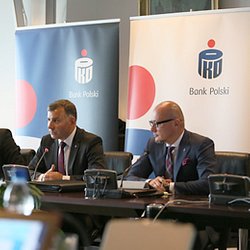 Dynamic growth in profits and scale of operations

In the second quarter of 2014 the PKO Bank Polski Group delivered net profit of PLN 855.6 million, a 6.6 per cent. gain over the previous quarter. It is the first period in which the consolidated results incorporate those of the recently acquired Nordea group companies, positive income contributors that bolstered the Group’s position of leadership in the Polish banking market and increased its market shares in all the main segments. Income of the second quarter grew by 16 per cent. q/q through expansion of net interest, fee and commission and other income. The takeover augmented the Group’s market share to 17 per cent. Its consolidated assets received a 22.5 per cent. boost on y/y basis, rising to PLN 242.3 billion. PKO Bank Polski maintained its substantially higher than sector average profitability and effectiveness.

The consolidated net profit for the first half of the year 2014 rose by 7.7 per cent. over the prior year's equivalent period result; reaching PLN 1 658.1 million. The consolidated operating profit for the first half of the year stood at PLN 5.5 billion, representing a 9.8 per cent. gain in y/y terms; as driven by an 8.8 per cent. y/y growth in net interest income and a 3.8 per cent. y/y growth in net fee and commission income. It is noteworthy that the strong 16 per cent. income gain in the second quarter is attributable to an 11.4 per cent. q/q growth in net interest income and an 11.1 per cent. q/q growth in net fee and commission income.
As stated by the PKO Bank Polski Board President and CEO Zbigniew Jagiełło: “We do not slacken the pace as we create a solid foundation for expansion of our sustainable competitive advantages and new income sources. The integration of the Nordea companies has proceed as planned and reaches a very advanced stage now: we are concentrating on achievement of synergies. Net income and assets of the integrated companies have boosted the PKO Bank Polski Group’s income and market position. At the same time, we have continued to implement the other important projects specified in our new strategy, including: development of a new bancassurance business model, establishment of a mortgage bank and development of a common standard for mobile payments.”.
The joint market share of PKO Bank Polski and Nordea in lending rose by 2.2 pps compared to that measured at the prior year’s end, to reach 18.3 per cent., while in deposit taking it rose by 1.4 pps to 17.7 per cent., primarily through growth in deposits of institutional entities. Net loans rose to PLN 178.0 billion or by 19 per cent. q/q while deposits climbed to PLN 171.4 billion or by 12.3 per cent. q/q.
In comparison to the prior quarter, the consolidated ROE rose by 0.3 pps to 13.4 per cent. whereas ROA held at 1.6 per cent. ROE of the Bank, on standalone basis, reached 13.5 per cent., the highest in its peer group.
The Group has also maintained high cost efficiency while experiencing high growth of its businesses. As at the end of the first half of 2014, annualised C/I ratio reached 43.4 per cent., which represented a small increase of 0.3 pps in y/y terms.
Over more than three years the Bank’s interest margin has been the highest within the peer group of its key competitors; and substantially higher than the banking sector average. As at the end of the first half of this year, interest margin on consolidated basis reached 3.6 per cent.
Loan portfolio quality improved, with the share of NPLs declining by 1.9 pps in y/y terms and by 0.9 pps in q/q terms to 7.2 per cent. Cost of risk declined by 14 bps in y/y terms and by 5 bps in q/q terms to 1.2 per cent.
Capital adequacy ratio of the PKO Bank Polski Group stood at 12.32 per cent.
Consumer loan sales have experienced a significant increase: in the first half of the year these reached PLN 4.8 billion, and were about 50 per cent. higher than in the first half of 2013. Mortgage loan sales in the first half of the year amounted to over PLN 6 billion, or were close to 24 per cent. higher than in the first half of 2013.
PKO Bank Polski has steadily implemented its strategic projects, which it perceives as its responses to the future challenges enabling it to build advantages in new areas of competition for the customer and the client. It has been building up its new bancassurance business model envisaged as an additional income stream. The Bank has recently filed with the Polish Financial Supervision Authority for establishment of a non-life insurance company. Meanwhile, the life insurance products offered by the Group’s new company PKO Ubezpieczenia are available to buyers and current holders of the Bank’s mortgage loans and personal accounts, and since recently also of its cash loan users.
The Bank has been developing the mobile banking channel: the IKO users were recently provided with a new version of its app, which, in addition to boosting the transaction speeds, adds a number of useful and easy to use functions. The overall number of the IKO users has also risen: to date, 185 000 users have completed a total of over one million transactions.
The PKO offer has also drawn an increasing number of the youngest customers. Under the PKO Junior programme children of below 13 years of age explore the practical dimension of the basic concepts of finance and manage their own micro-budgets. Within the framework of its PKO Junior offer, the Bank opened 131 000 accounts, now used by 124 500 children. In the recent months, the Bank has expanded the PKO Junior range by adding prepaid cards for children; incorporating the classic plastic card, a proximity card sticker and a silicone key fob or a giraffe mascot.
Expected to enhance its liquidity position and to provide it with stable funding sources, the Group’s Bank Hipoteczny mortgage bank is preparing to go into operation at the turn of the year 2014/2015.