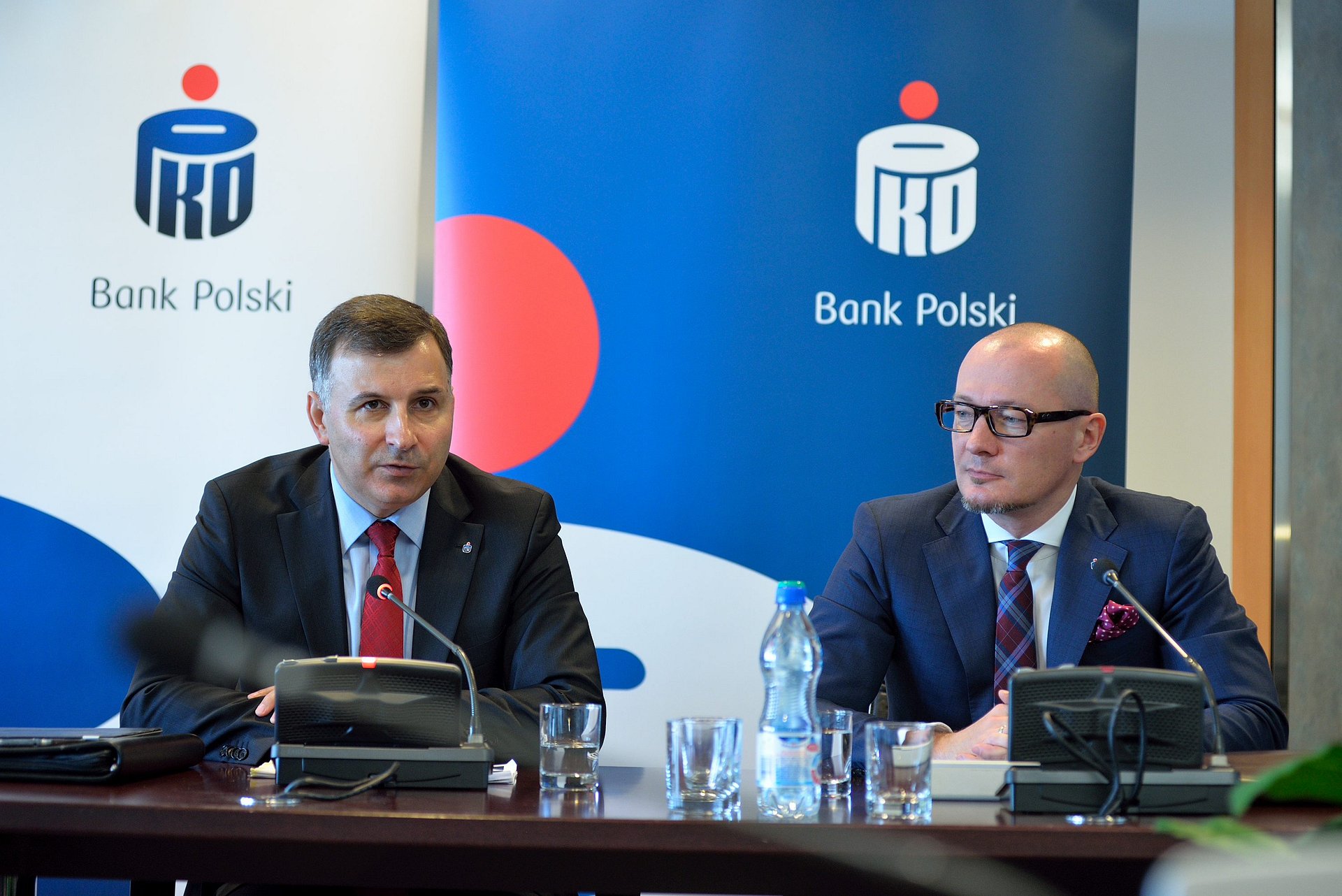 Stable financial results in the first quarter of 2014

In the first quarter of this year, the Bank’s consolidated net profit rose by 2.1 percent on the year, to PLN 802.6 million, while costs of risk declined by 0.14 percentage points, to 1.26 percent. The three-month consolidated income on business activity amounted to PLN 2,548.2 million, net interest income to PLN 1,739.8 million and fee and commission income to PLN 705.4 million.
- We focus on building value for shareholders via stable and balanced growth. Recovery in interest income, stabilization of fee and commission income after regulatory changes and further credit expansion growth are our main financial goals for 2014. This year, we will also see first synergy effects related to taking over Nordea’s Polish assets, said Zbigniew Jagiełło, chief executive officer of PKO Bank Polski.
For a long time, cost effectiveness of PKO Bank Polski Capital Group, measured as cost-to-income ratio, has been the best among the largest banking groups in the country. At the end of the first quarter of 2014, the ratio amounted to 43.1 percent. Consolidated operational costs fell by 12.1 percent on the year, to PLN 1,126 million.

The Group also maintains high asset and capital profitability ratio; consolidated ROA and ROE indicators were at 1.6 percent and 13.1 percent, respectively. Provisions against irregular loans declined by 7.7 percent on the year, to PLN 413.5 million, mainly due to good quality of consumer and housing loan portfolios. The share of irregular loans decreased by 1.1 percentage point, to 8.1 percent. PKO Bank Polski Group maintains its strong capital position. At the end of the first quarter of 2014, its consolidated capital adequacy ratio amounted to 13.5 percent, while Core Tier 1 ratio – to 12.4 percent.

The bank expands its scale of activity – the consolidated balance sheet increased by 2 percent on the year, to PLN 203 billion due to annual 1.7 percent growth in credit portfolio (to PLN 150 billion) financed by growing customer deposits that increased by 2.8 percent on the year, to PLN 153 billion as well as by the Euro 500 million bond issue.
In the first quarter of 2014, the bank increased the sale of new consumer and housing loans. During this period, PKO Bank Polski sold PLN 2.24 billion in consumer loans, up by 53 percent on the year. Customers looking for a housing loan increasingly often chose PKO Bank Polski’s offer; for a long time the Bank has been the leader in this area. In the first quarter, it sold PLN 2.8 billion-worth housing loans, by 27 percent more than in the first quarter of last year.
Almost half of entrepreneurs receiving loans under de minimis program take them in PKO Bank Polski. By the end of March, over 23,000 the Bank-backed guarantees were issued, amounting to over PLN 2.7 billion.

The next stages of taking over Nordea’s assets are being implemented in line with the approved schedule. On 1 April, the deal was officially closed. Starting on 12 May, PKO Bank Polski is a sole owner of Nordea Bank Polska shares. Until the legal merger scheduled for October 2014, both financial institutions will act as two separate entities. Expanding Capital Group allows to benefit from the first synergies. Starting in May, Nordea Bank Polska has been offering PKO Bank Polski’s cash loans. PKO TFI’s investment fund units are also available. On the other hand, PKO Bank Polski’s customers who buy mortgage loan or a credit card can also buy insurance products offered by Nordea TuNŻ.
***
PKO Bank Polski is the leader of Polish banking sector. In the first quarter of 2014, its consolidated net profit rose to PLN 802.6 million. PKO Bank Polski is among top banks; in the Jakość na Bank 2013 ranking by TNS Polska and Puls Biznesu daily, it was ranked as number three. The Bank’s Contact Center, for the fifth time in a row, was a winner in a regular survey of banks’ hotlines carried out by ARC Rynek i Opinia. According to a survey by Indicator marketing research center and Warsaw Banking Institute, PKO Bank Polski is the bank of the first choice for small and medium-sized enterprises. PKO Bank Polski’s annual reports are regularly awarded by the Institute of Accounting and Taxes in The Best Annual Report competition in the Banks and Financial Institutions category. For its compliance with corporate governance principles and activities related to corporate social responsibility, PKO Bank Polski has been awarded with the Economic Award of the President of the Republic of Poland. PKO Bank Polski also enjoys the strongest image among Polish banks. According to a prestigious magazine The Banker which values PKO Bank Polski’s brand name for USD 1.25 billion, the Bank remains the most valuable brand in Polish banking sector. According to the ranking of the Most Valuable Polish Brands 2013 by Rzeczpospolita daily, PKO Bank Polski’s brand has remained the most valuable one in the financial companies’ category – and valued at PLN 3.7 billion. In 2012, the Jury of the Banking Leaders Competition, organized as a part of the Polish Economic Congress, awarded PKO Bank Polski in the Best Bank and the Most Innovative Bank categories for the new offer of School Saving Associations. In rankings based on students’ opinions, the Bank was ranked as one of the best employers in Poland. The Bank’s high position is also confirmed by surveys carried out by an international company Universum Global and AIESEC carried out among students of Poland’s best universities. PKO Bank Polski is also a winner of “Golden Banker 2013” award in “the Best Mortgage Loan” and “Financial Innovation” category for its IKO application.