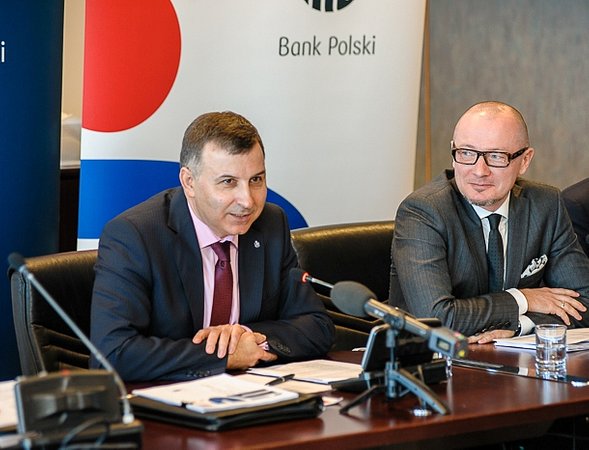 2013 – The year of expansion and dynamic business development

In 2013, PKO Bank Polski Capital Group posted a solid financial result of PLN 3.2 billion. The net profit for the fourth quarter amounted to PLN 938 million, which means 25 per cent quarterly growth. Both loan and deposit volumes increased. The Bank serves over 8 million customers. Signing an agreement on acquiring a Polish part of Scandinavian Nordea Group assets was the most important event in the previous year allowing to considerably broaden the scale of the Bank’s activity and to generate cost and revenue synergies.

- In terms of PKO Bank Polski’s activity, last year was full of historical events related to its expansion on the domestic market, strategic alliances, improved quality and development of innovative product offering which, in the future, will positively influence both the scale of the business and the reported results. As for this year, integrating the acquired Nordea assets and the best, most efficient usage of the merger, will be the most important challenge. In addition, in this and in the coming years we will strive for stable improvement of the financial results, in line with the economic recovery and consistent implementation of the Bank’s strategy – Zbigniew Jagiełło, the Chief Executive Officer at PKO Bank Polski, says.

For a long time the cost effectiveness of PKO Bank Polski Capital Group, measured as a cost-to-income ratio, has been the best among the largest banking groups in the country. At the end of 2013, the ratio was at 43.2 per cent. The Group maintains a high level of asset and equity profitability; its consolidated ROA and ROE indicators were at 1.6 per cent and 13.2 per cent, respectively. As a result, the Bank gradually builds sustainable shareholder value.

The full-year consolidated income on continued operations exceeded PLN 10.7 billion, while net interest income was at PLN 6.7 billion. Despite a decline in interchange fee and slower market dynamics, net fee and commission income rose 3.1 per cent on the year, to over PLN 3 billion, mainly thanks to higher fees related to fund servicing and insurance products sale.

The fourth-quarter result on continued operations was up 25.8 per cent on the quarter. As compared to the third quarter, the last quarter of 2013 saw higher net fee and commission income, by 5.4 per cent and 5.5 per cent, respectively.

Almost half of entrepreneurs, who apply for loans under the government’s de minimis program, do it with PKO Bank Polski. By the end of January, the Bank issued almost 20,000 loan guarantees for the total amount of PLN 2.3 billion.

Customers came to like the innovative mobile payments’ offer, IKO. So far, the IKO application has been activated by 125,000 people who had made 400,000 transactions for the total amount of PLN 100 million. IKO is the winner of an international competition Effective Mobile Marketing Awards 2013 organized by Mobile Marketing Magazine, in the Most Effective Mobile Payment Solution category. The innovative solution for mobile payments will become a basis for the Polish Payments Standard currently being developed together with partner banks.

PKO Bank Polski has been increasingly distinguished for the quality of its product offering and customer service. The Bank’s Contact Center, for the fifth time in a row, became a leader in bank hot-lines ranking; local governments become more interested in the Bank’s offer; the Bank offers one of the first in the world Internet banking solutions addressed at the youngest and, at the same time, a comprehensive program of financial education – PKO Junior. Thanks to launching a new retail sale model, branches upgrading and changes to the corporate network, the customers are able to enjoy better standards and higher quality of the banking services. In addition, since the beginning of the year, the Bank’s customers may rely on assistance of the Customer Ombudsman.

PKO Bank Polski was ranked as Number One among financial companies and Number Two in the general ranking of Polish brands, thus maintaining its 2012 position. The Bank’s brand name is valued at PLN 3.7 billion. A prestigious magazine The Banker has valued the Bank’s brand name at 1.29 billion dollars.

The main companies from PKO Bank Polski Capital Group have also strengthened their market position. The investment fund PKO TFI has increased its market share by net assets from 6.9 per cent to 7.6 per cent and is ranked as the number fourth. TFI’s net profit grew 46.9 per cent on the year. The pension fund PKO BP Bankowy PTE has advanced in the ranking from the ninth to the eighth position. PKO Leasing Capital Group has increased its market share by leased assets advancing to the third position from the fourth in 2012, while the leasing company’s net profit rose 55.5 per cent.

In late 2013 PKO Bank Polski finalized the sale of 66 per cent stake in eService. The strategic alliance with a global technological partner will allow to accelerate the company’s expansion thanks to innovative solutions offered current and future customers. The company is currently ranked as the first (No 3 in 2012) by generated transactions.

***
PKO Bank Polski is the Polish banking sector leader. In 2013, PKO Bank Polski Capital Group posted a solid financial result of PLN 3.2 billion. The bank is Polish company with the highest value of free-float shares listed on the WSE. PKO Bank Polski was ranked as the third one in Banking Quality 2013 ranking developed by TNS Polska and Puls Biznesu daily. The bank’s Contact Centre, for the fourth consecutive time, was the winner in a cyclical survey of bank hot-lines carried out by ARC Market and Opinion. According to a survey by Marketing Research Centre Indicator and the Warsaw Banking Institute, it has been a bank of the first choice for small and medium-sized companies. PKO Bank Polski’s annual reports are regular winners in The Best Annual Report contest organized by the Accounting and Tax Institute in the Banks and Financial Institutions’ category.  For complying with corporate governance principles and its activity in Corporate Social Responsibility area, PKO Bank Polski was honoured with the Economic Prize of the President of the Republic of Poland. PKO Bank Polski is also a bank with the strongest image in Poland and the prestigious magazine The Banker values PKO Bank Polski brand at USD1.25 billion. In the Most Valuable Polish Brands 2012 ranking by Rzeczpospolita daily, PKO Bank Polski brand proved to be the most valuable one in the finance category – it was valued at PLN3.72 billion. The jury of the contest the Banking World Leaders, organized within the framework of the Polish Economic Congress, awarded PKO Bank Polski with the prize in the 2012 Best Bank and The Most Innovative Bank category for its new offer of School Savings Associations (SKO). In rankings based on students’ opinion, the bank found itself among the best employers in the banking sector. Surveys carried out among students of the best universities in the country by a global company Universum Global and AIESEC have confirmed the bank’s high ranking in this category.