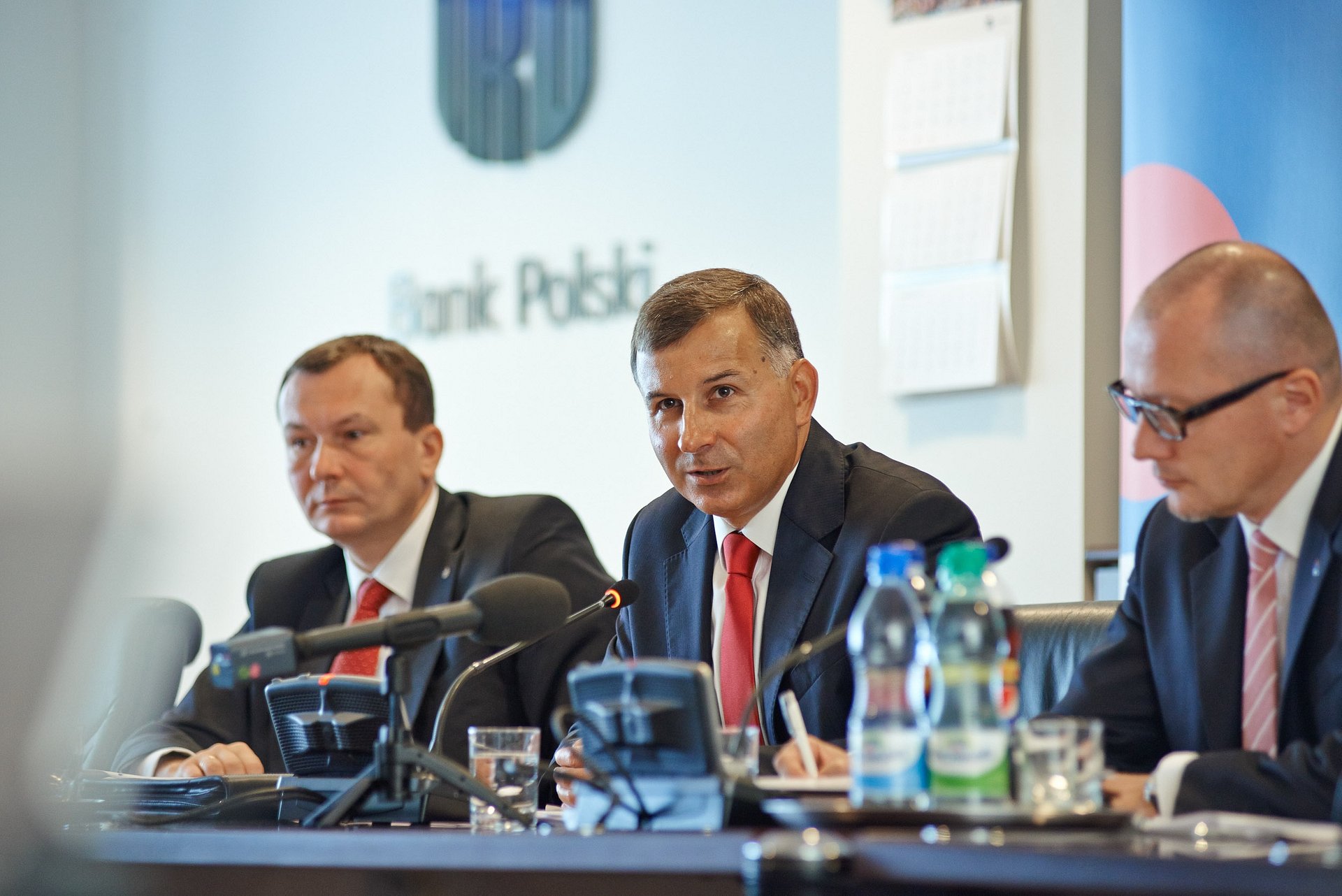 In the first half of 2013 PKO Bank Polski Capital Group reported strong bottom line of PLN1.53 billion, maintained high effectiveness and cost discipline. Costs of risk declined. The bank recorded growth in business volumes, both in loans and deposits. The acquisition of Polish assets from Nordea will guarantee the growth acceleration.

In the second quarter of 2013 the bank posted consolidated net profit of PLN752.8 million. Costs of risks, as compared to the previous quarter, fell by 0.05 percentage point, to 1.35 per cent. When compared to its rivals, in the first half of 2013 the Group reported high-quality results on business activity, at PLN5 billion. Net interest income and fee and commission income were the strongest items in the structure – with total participation at 96.2 per cent. The growth in the consolidated fee and commission income to PLN 1.54 billion at the end of the first half of 2013 resulted from: the growth in fee and commission income on loan insurance by 31.5 per cent on the year, due to, among other factors, increase in sales of loans, mainly PLN-denominated housing loans as well as the growth in fee revenue on investment and OFE funds servicing, by 20.4 per cent on the year.
- Against its competitors, PKO Bank Polski distinguishes itself with high effectiveness of operations and the safest deposit structure. Despite strong fall in interest rates level, the six-month profit exceeded our targets. When implementing the goals defined by the new Strategy, we initiate activities aimed at generating higher revenue, also non-interest one. The acquisition of Nordea’s Polish assets is the key element of the Strategy. Apart from that, we have been implementing other projects, for instance the one related to developing bancassurance operations based on life insurance company Nordea Polska TuNŻ and a strategic alliance in the payments area, Zbigniew Jagiełło, Chief Executive Officer at PKO Bank Polski, said.
The six-month financial results of PKO Bank Polski Capital Group were strongly affected by falling interest rates. After July interest rate cut, the key reference rate declined to the historically lowest level of 2.50 per cent. When compared to its competitors, PKO Bank Polski has the largest share in household deposits which results in high stability of deposit base, but also in lower flexibility in short-term financial terms adjustment. In addition, the Bank has the highest – compared to its rivals – term deposit portfolio, including significant volumes of deposit products with maturity shorter than 12 months which, in the falling rates environment, generate slightly higher interest costs in short term.

PKO Bank Polski maintains its leading position on the loan and deposit market. At the end of the first half of 2013, gross credit portfolio increased to PLN153.8 billion, by 3.7 per cent since the beginning of the year; deposit portfolio to PLN157.9 billion, by 2.0 per cent from the end of 2012.
The Bank remains the unquestionable leader on the housing loans market. In the second quarter of this year, the Bank sold PLN2.7 billion in housing loans, which means over 70 per cent growth as compared to the second quarter of the last year. The sale of loans for small and medium-sized enterprises rose in the second quarter to PLN1.2 billion, or by more than 23 per cent on the year. The sale of loans in retail and private banking rose by 19 per cent on the quarter, to PLN1.7 billion. More than half of entrepreneurs who get loans under de minimis programme come to PKO Bank Polski. The amount of guarantees reached over PLN1 billion, which translated into total value of granted loans exceeding PLN1.8 billion.
The main companies from the Group have also recorded strong results. PKO TFI is ranked as the third one in terms of net assets, with 7.1 per cent share in the investment funds market. In the first half of the year the company posted net profit of PLN17.2 million, by 42.9 per cent higher than in the first half of last year. PKO BP Bankowy PTE SA, after first six months of the year posted net profit of PLN13.4 million, almost doubled from the last year. Total net assets of PKO BP Bankowy OFE rose by PLN9.5 billion, while total net assets of OFE POLSAT – PLN2.4 billion, which, in total, places the Funds as the market’s number 8th.

In the first half of the year eService posted net profit of PLN19.3 million, by 66.7 per cent higher on the year. The company has become the leader among clearing agents operating in Poland.
Under “The Best Everyday” strategy, PKO Bank Polski has implemented a number of initiatives in the area of the key strategic steps and signing an agreement to buy Polish assets of Nordea was the most important of them. The agreement, signed on June 12, stipulates that PKO Bank Polski will take over Nordea Bank Polska, Nordea Finance Polska, Nordea Polska TunŻ as well as corporate credit portfolio of the largest domestic companies served directly by the seller, for total amount of PLN2.83 billion. The planned deal will allow generating revenue and cost synergies as well as increasing the shareholder value.
The Bank has launched new sales management system the New Rhythm, aimed at increasing sales and its effectiveness as well as the new corporate structure; it also develops its network of ATMs as well as ATMs with depository and money transfer functions.
In the area of innovation and technology, the Bank has introduced mobile payment service IKO, which now has almost 50,000 users. The number of IKO-generated transactions now amounts to over 100,000, while their value – to PLN30 million. Together with five other large banks, PKO Bank Polski has initiated works on developing a local standard for mobile payments; it has shared one of the first in the world Internet banking services for the youngest, below 13 year of age – PKO Junior. According to retail banking development plan, PKO Bank Polski has started to launch the New Personal Banking Model, aimed at building the best model of banking for affluent customers, becoming the first bank in customer satisfaction surveys and becoming the bank of first choice for this group of customers.
The Bank has also launched the Employee Pension Programme implementing a goal of long-term saving and allowing supplementing pension benefits of its employees.
***
PKO Bank Polski is the Polish banking sector leader. After the first six months the bank’s consolidated net profit was at PLN1.53 billion. The bank is Polish company with the highest value of free-float shares listed on the WSE. PKO Bank Polski was ranked as the third one in Banking Quality 2013 ranking developed by TNS Polska and Puls Biznesu daily. The bank’s Contact Centre, for the fourth consecutive time, was the winner in a cyclical survey of bank hot-lines carried out by ARC Market and Opinion. According to a survey by Marketing Research Centre Indicator and the Warsaw Banking Institute, it has been a bank of the first choice for small and medium-sized companies. PKO Bank Polski’s annual reports are regular winners in The Best Annual Report contest organized by the Accounting and Tax Institute in the Banks and Financial Institutions’ category.  For complying with corporate governance principles and its activity in Corporate Social Responsibility area, PKO Bank Polski was honoured with the Economic Prize of the President of the Republic of Poland. PKO Bank Polski is also a bank with the strongest image in Poland and the prestigious magazine The Banker values PKO Bank Polski brand at USD1.25 billion. In the Most Valuable Polish Brands 2012 ranking by Rzeczpospolita daily, PKO Bank Polski brand proved to be the most valuable one in the finance category – it was valued at PLN3.72 billion. The jury of the contest the Banking World Leaders, organized within the framework of the Polish Economic Congress, awarded PKO Bank Polski with the prize in the 2012 Best Bank and The Most Innovative Bank category for its new offer of School Savings Associations (SKO). In rankings based on students’ opinion, the bank found itself among the best employers in the banking sector. Surveys carried out among students of the best universities in the country by a global company Universum Global and AIESEC have confirmed the bank’s high ranking in this category.