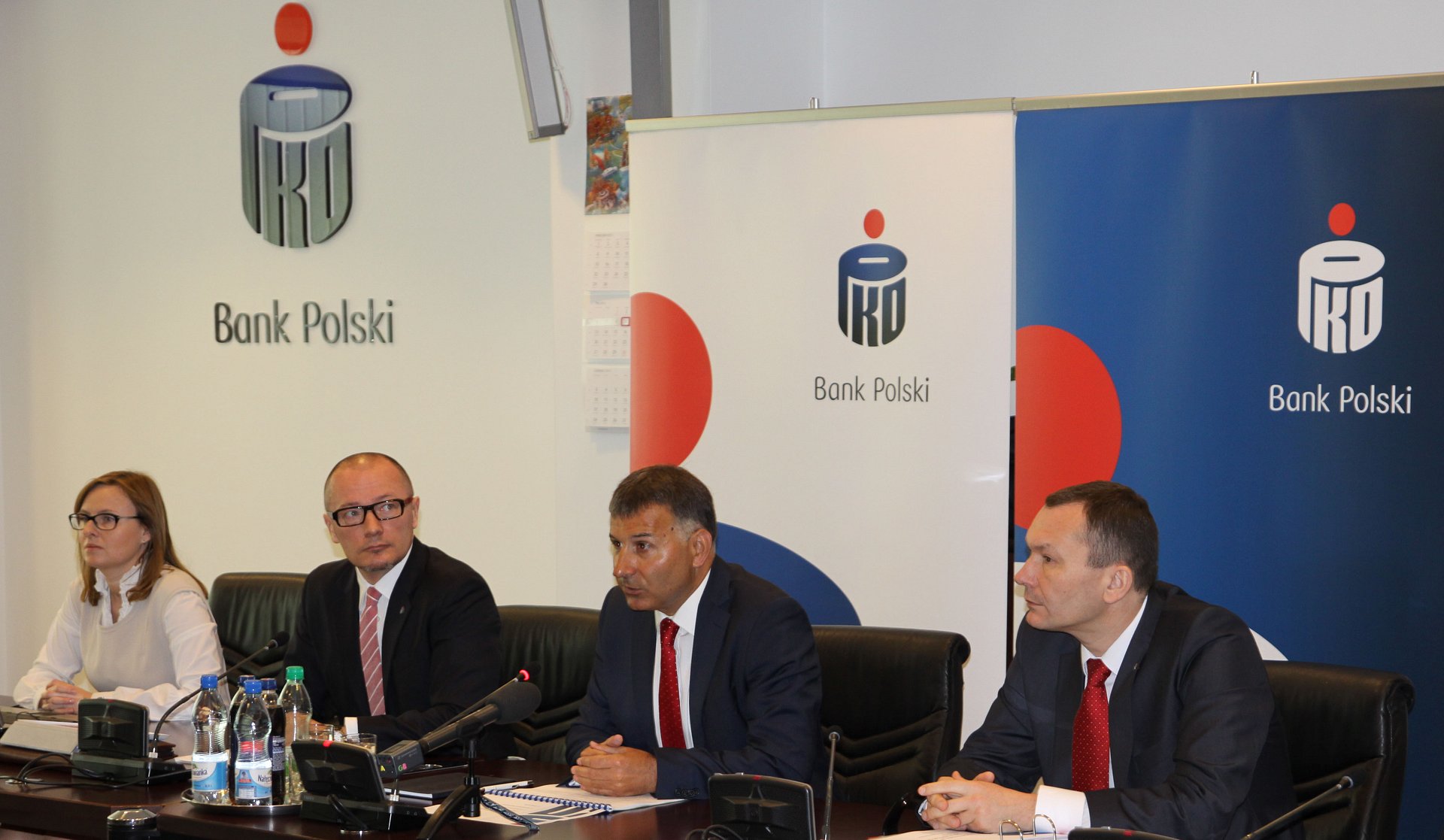 In the first quarter of 2013 the PKO Bank Polski Group achieved PLN 781.4 million in net profit. We retained leading position in the key market segments and high operational efficiency as we maintained cost discipline. The Group consolidated its capital strength; its capital adequacy having risen to 13.7%. Compared to the final quarter of a year earlier, cost of risk came down by 0.04 of a percentage point, to 1.4%.

In the first quarter of 2013 the banking sector found itself affected by a sharp economic downturn. Net results of the entire sector were substantially below those of the first quarter of 2012. Lowering of interest rates by the Monetary Policy Council by a total of over 1.5 ppt over the past few months combined with weak lending market growth precipitated a substantial drop in the sector’s interest income.

Under conditions of depressed interest rates the Group delivered robust net profit. The Group’s efficiency indicators also remained strong: ROE at 14.6% and ROA at 1.8%.
The PKO Bank Polski Group maintains high cost discipline. Administrative expenses fell by 2.8% YoY while C/I ratio, on annualised basis, stood at 41.1%. as at the end of the first quarter of 2013.

We need to be prepared for operation in a less supportive economic environment with lower interest rates. PKO Bank Polski has a safe and stable funding base, primarily retail deposits, whose contribution is substantially higher than in majority of its peer group banks; standing at 78%. At the same time, the bank has systematically increased its share in term deposits, which by now represent 60% of retail deposits. Under conditions of rapid decline in market rates, price response in such deposits is always delayed, which has clearly been the main driver of the decline in the banks’ earnings, particularly in the first half of the year. Note that in developing the new strategy we took into account all the determinants of our business in the future, and are thus ready to face the challenges ahead. Working with resolve, we intend to seek out opportunities for continued stable growth, including new revenue streams, and to maintain cost discipline in the process, says Zbigniew Jagiełło, President of the Management Board of PKO Bank Polski.
PKO Bank Polski maintains its leading position in the lending and deposit markets. In the first quarter of the year it improved its market shares further through high sales in consumer, mortgage and corporate loans. It remains a leader of the housing finance market: for some years now, one out of every three housing loans is originated by the bank. PKO Bank Polski is also in the process of implementing the New Rhythm, a new operational model for its branches, aimed, among others, at improving efficiency of sales. In the first month of the New Rhythm’s operation retail segment sales significantly exceeded the assumed targets.

In the first quarter of this year the bank registered substantial 4.9% growth above the 2012 year-end figure in the volume of loans granted to corporate entities; thus maintaining its position of a market leader.

From the beginning of the year PKO Bank Polski has set a new, innovative standard in mobile payments: its IKO, a project aimed at building a shared infrastructure for mobile payments in Poland, jointly with other banks and financial institutions. Within two months of its launch, IKO has circa 30 000 active users, and is accessible in 35 000 terminal devices, with transaction volume having reached PLN 5 million.

In the first quarter of 2013 cost of risk improved by 0.04 ppt over the first quarter a year earlier reaching 1.4 ppt; mainly as a result of a decline in write-downs on the consumer and housing loans portfolios.

The Group maintained its high capital strength. As at the end of the first quarter of 2013 the consolidated capital adequacy ratio rose by 0.7 ppt above the 2012 year-end figure while Core Tier ratio rose by 0.8 ppt to 12.8%.

Selected companies of the PKO Bank Polski Group also achieved first-rate results. PKO TFI increased its assets under management to PLN 10.7 billion, or by 6.5% compared to the 2012 year-end figure. GK PKO Leasing achieved significant growth in sales, and now holds the strong ‘number three’ position in the market in terms of leased assets. As it increased the number of its terminal placements, eService registered significant growth in the scale of the transactions processed in the first quarter of 2013; total of PLN 8.5 billion. At the time the company supported 71 700 payment terminals.

In April 2013 the bank unveiled its new strategy for the years 2013-2015: “The Best Everyday”. The strategy provides for delivery of sustainable shareholder value growth, retention of high cost efficiency, significant reduction of the cost of risk, growing of market shares and customer service quality and efficiency, maintenance of high capital adequacy, and active pursuit of growth opportunities in Poland and Central Europe through acquisitions or alliances. To achieve these objective, the bank will engage all the competitive advantages gained at completion of its previous Leader strategy for the years 2010-2012.
***
PKO Bank Polski is a Polish banking sector leader. In the first quarter of 2013 the PKO Bank Polski Group achieved PLN 781.4 million in net profit. It is a Polish company with the highest value of free-float shares on the WSE. The bank has been regularly recognised in prestigious industry rankings. The Polish Accountancy and Tax Institute honoured the PKO Bank Polski Annual Report for the Year 2011 with the Grand Prize in The Best Annual Report competition, in the Banks and Financial Institutions category. It has now been the winner in that category for the second consecutive year.  PKO Bank Polski also received the Grand Prize in Bank monthly’s ranking of the 50 largest banks in Poland for 2012: among others, for growth rate of its balance sheet total and its overall market activity. Also, Gazeta Bankowa awarded the Bank for the highest performance in its category. PKO Bank Polski once again came out the winner in the survey of call centres of banks carried out by ARC Rynek i Opinia. PKO Bank Polski is also the country’s strongest image bank. It retains the position of the highest worth brand in the Polish banking market according to the prestigious The Banker magazine, which assessed the PKO Bank Polski brand value at USD1.25 billion. The Most Valuable Polish Brands Ranking 2012 of the Rzeczpospolita daily listed the PKO Bank Polski brand as the most valuable one in the finance category; its worth set at PLN3.72 billion. PKO Bank Polski is also the highest value domestic bank in Poland; this according to the Newsweek magazine’s ranking of the 100 most valuable companies. Philanthropic activities of PKO Bank Polski met with recognition of the Academy for the Development of Philanthropy in Poland, which granted the bank and its Inteligo Financial Services the Benefactor of the Year 2010 statuette, and of the Polish Donors Forum, which granted the bank the Special Award for its longstanding and consistent support of public interest causes. A ranking based on an opinion poll of students has recognised the bank as one of the best employers of the banking sector. This high position achieved by bank in the employer category has been further confirmed through the surveys carried out among students of Poland’s best universities by the international Universum Global and AIESEC.