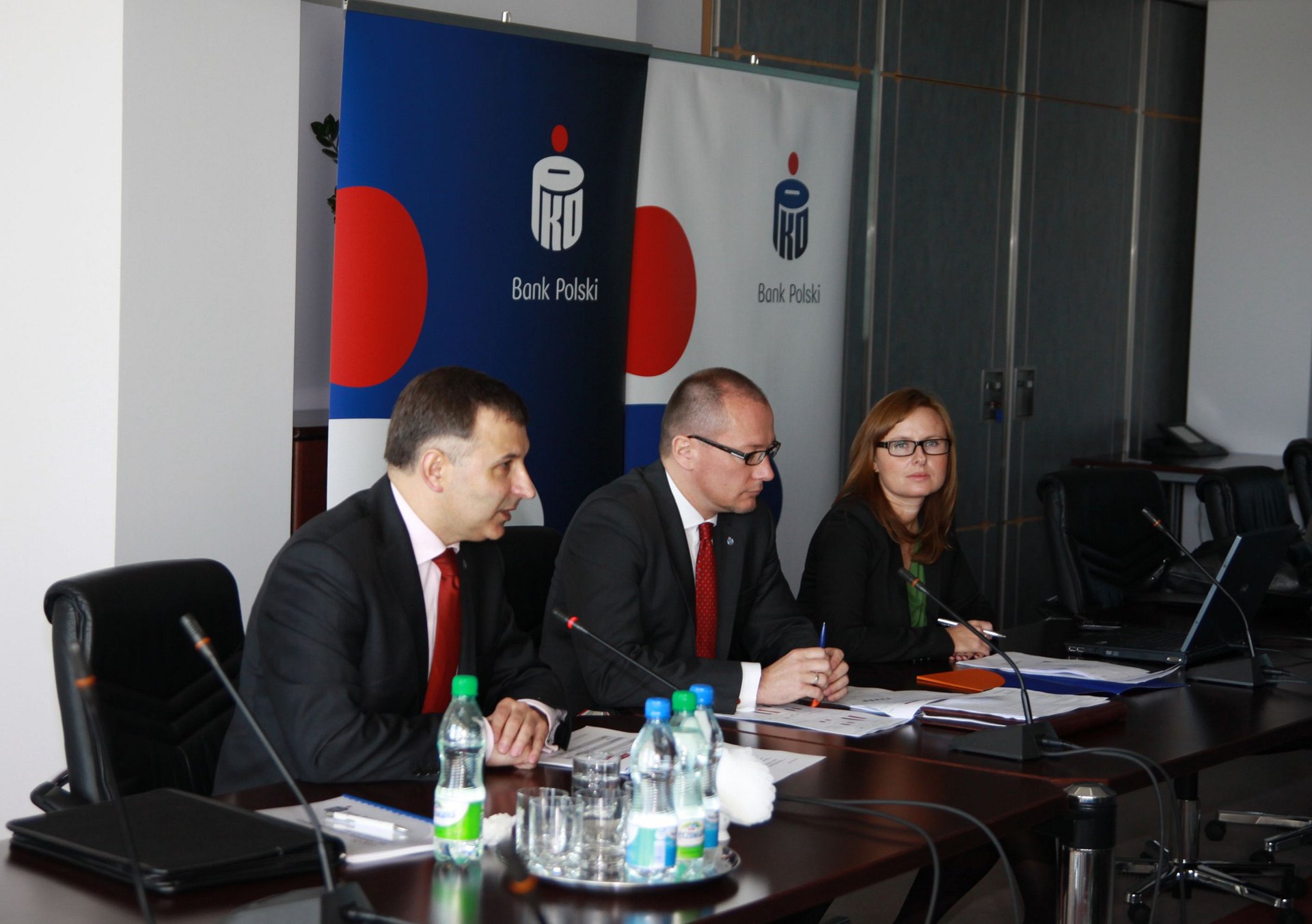 The financial results of Capital Group and PKO Bank Polski have maintained their upward trend. After the first quarter of 2011 net profits reached 871 million PLN and 851 million PLN respectively. Compared to the same period last year the Group’s profits rose by 21.0% and the Bank’s by 17.1%. ...

The financial results of Capital Group and PKO Bank Polski have maintained their upward trend. After the first quarter of 2011 net profits reached 871 million PLN and 851 million PLN respectively. Compared to the same period last year the Group’s profits rose by 21.0% and the Bank’s by 17.1%.

The continuing improvement in macroeconomic conditions in the first quarter of 2011 had a positive influence on the condition of the banking sector. The situation on the deposit-credit market  continued to be influenced by stable growth of sales of mortgage loans, an improvement in the market for credit for businesses, and faster growth in deposits than last year. Thanks to the action taken at this time by the Capital Group of PKO Bank Polski a profit of 151 mln PLN more than in the same period last year was achieved. The high results of the Capital Group’s business activities combined with the maintainenance of a conservative approach to risk and effective cost management had a decisive influence on the good financial results.

“We forecast double-digit profit growth and it has been achieved. We recorded an increase in the volume of credit by 12.6% yoy and deposits by 10.3%. We have also improved the quality of the portfolio,” said Zbigniew Jagiełło, CEO of PKO Bank Polski.

The 2 581 million PLN income from the Group’s business activities was mainly due to an increase in net interest income compared to the same period last year. Thanks to an increase of 16.6% YOY, with only a slight increase in general administrative costs, the C/I ratio decreased to 40.8% on an annual basis.

After the first quarter of 2011, due to the high growth in net profit, the effectiveness of the Group remained at a high level. At the end of the quarter ROE was 15.4% and ROA – 2.0%.

The increase in the deposit base and the high level of the Group’s equity covered the capital requirements which have been rising alongside increased lending, allowing the continued stable growth of the business. At the end of the first quarter of 2011 the capital adequacy ratio reached 13.4%.

PKO Bank Polski’s net profit in the first quarter of 2011 amounted to 851 mln PLN, and was 124 million PLN higher than the same period last year.

Meanwhile, there was a further improvement in the cost-to-income ratio of the Bank. The C/I ratio decreased by 2.4 pp. yoy to 39.7%.

In the first three months of this year there was an increase in the results of the Bank's business activities, mainly due to an increase in net interest income by 17.1% YOY to 1,687 million PLN.

The end of the first quarter saw an increase in volumes of loans and deposits of the Bank. As a result of the launch of a sales campaign the loan portfolio increased by 14.9 billion PLN and deposits by 11.4 billion PLN. The highest rate was recorded for loans to SMEs and mortgage banking. The volume of mortgage loans, accounting for 44% of total loans, increased by 20% compared to the same period last year. The second largest was corporate loans, constituting 22% of the portfolio, followed by retail and private banking loans at 17%.

At the same time there was an increase in retail customer deposits. Retail and private banking deposits, the largest segment, constituting 71% of the entire base, reported a 9% increase YOY. The  next segments in terms of share of deposits in the portfolio included corporate deposits (up 13% YOY), SMEs (up 6% YOY) and the customer housing market (16% increase YOY).
***
PKO Bank Polski is the undisputed leader of the Polish banking sector in terms of financial performance. Net income for the first quarter amounted to 851 million PLN. With over 25-percent market share the Bank also holds the leading position in sales of PLN mortgages, offering not only traditional mortgages, but also preferential mortgages with state subsidies. PKO Bank Polski is  awarded in many prestigious rankings. The Bank’s mortgage offer, in terms of adapting to untypical customer expectations, has been recognized as the best on the market by financial comparison engine Comperia.pl. The Bank is also praised for its flexibility to offer these loans, which may be granted to cover a variety of purposes, as well as for being the best savings and investment bank. As many as five products of PKO Bank Polski: mortgages, cash loans, accounts, deposits and credit cards, have been awarded by the magazine Reader's Digest with "Product of the Year 2010" certificates as the most often and most frequently chosen products by customers. The Bank has won the "Golden Banker" award as the best in the loan market and the loan market for firms, has also won the contest "Entrepreneur-Friendly Bank", holds the certificate "Customer-Friendly Company" and is the best commercial bank according to Warsaw Business Journal. PKO Bank Polski’s innovative solutions for corporate banking were awarded in the Europrodukt  competition. The bank received three statues in the last edition of the competition in the product category – payroll and consolidated account and escrow account. The cutting edge technology introduced by the PKO Bank Polski has also been recognised by Gazeta Bankowa, which awarded the bank the title “IT Banking Leader of Financial Institutions 2010”. According to analysis by the research firm MillwardBrown SMG/KRC, among the surveyed financial institutions PKO Bank Polski enjoys the highest confidence – three quarters of respondents trust its financial stability. PKO Bank Polski is also the strongest bank in the country in terms of image, as shown by its position as leader in the "Top Brand"  ranking compiled by Press magazine. It is also the most valuable brand on the Polish banking market. Specialists from The Banker magazine estimated the value of its brand at one and a half billion USD and in Rzeczpospolita "Polish Brands 2010" ranking  its value was set at PLN 3.6 billion.